Thanks to the boys at Comic TWART, I added Daily Sketchjam to my list of daily Internet meanderings, and it’s there I became enamored of the work of Ryan Cody. Every day, Ryan shares his take on a wide array of comicdom characters in different media…pen and ink, digital art, black and white, etc. Visit early and often to http://sketchjam.blogspot.com/

I reached out to him and Ryan generously agreed to be interviewed and to draw with my girls, Grace & Cate, over at 5 Minute Marvels. Thanks, Ryan.

Marvel Smartass: What started the ball rolling down the hill? Tell me how your love affair with comics started.

Ryan Cody: I started reading comics when I was in 5th or 6th grade. I was always a Marvel fan when I was kid and used to buy anything I could get my hands on from Spider-Man to Daredevil to West Coast Avengers. As I got a little older I narrowed my tastes down to the Chris Claremont X-books. That’s where I really started to fall in love with the artwork. He had some amazing talent on those books. John Romita Jr., Mark Silvestri, Jim Lee, Alan Davis and Paul Smith to name a few. From then on I tended to follow artists more than characters or titles.

Marvel Smartass: What comics are you reading now?

Ryan Cody: I don’t read many comics now. I guess my favorites would be the Hellboy and BPRD books. Umbrella Academy is really good, my favorite superhero book is Invincible. I will also buy anything drawn by Sean Murphy. I will buy a book based off who is drawing it, I don’t buy any regular titles.

Marvel Smartass: You have a crisp, clean art style. How did it develop? Which artists were most influential on you?

Ryan Cody: When I first started drawing I was #8593 in the Jim Lee clone fan club. He and Mark Silvestri were my two biggest influences early on. In my early twenties I stopped buying comics and stopped drawing all together for about 5 years. When I got back into comics I saw artists who I had never seen before that I really liked. Mike Oeming and Bruce Timm were doing stuff that I really liked and in styles that I naturally leaned towards. I started drawing again and decided to give another run at the whole comic book thing. This was about 5 years ago and my stuff then looked very much like Oeming’s work on 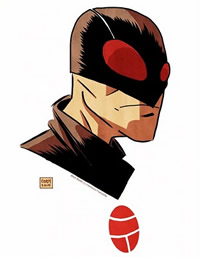 Powers. Since then I have really learned to love the work of guys like Darwyn Cooke, Jack Kirby and Alex Toth along with my original influences.

Marvel Smartass: For younger artists thinking, “I want to make a go of it,” what are some of the opportunities to look for … and some of the pitfalls to avoid?

Ryan Cody: Every artist always gives the same advice to this question — and they say it because it’s true. Draw from life as much as possible. If you are old enough to take life drawing classes then take as many of those as you can. Study a wide range of artists from Brain Hitch to Bruce Timm to Norman Rockwell. Draw every day and show your work to other artists to get honest feedback. Non-artistic friends and your Mom will not give you the honest criticism you need.
Marvel Smartass: Tell me a little about how your original book, Villains, started. How did your partnership with Adam Cogan and Russ Lowry begin? Anything coming up with your partnership? (P.S. Congrats on the Hollywood option.)

Ryan Cody: Adam saw some work I had posted online and contacted me about possibly working with him on an idea he had called Villains. We went over the plot together, he wrote the books and I drew them. I knew Russ through a mutual friend and I think he has a tremendous eye for color and mood and our styles match up pretty well. We asked him to join the team and were lucky enough that he said yes. We have always had plans for a sequel to the first story, but nothing is set in stone right now.

Marvel Smartass: Writers say, “Write every day.” Your Daily Sketchjam work definitely shows that you are committed to drawing and working every day. What does it take to cement a discipline like that? And, what have you learned sketching and posting with a group of artists as you do there?

Ryan Cody: Someone told me once to draw every day if I was serious about wanting to become a working artist. The Sketchjam is a great opportunity for me to just put up some loose sketches or more finished pieces. It’s great when the other members post and we get a good community vibe going. Discipline is needed in every field if you want to excel at it, so I do my best to hit the board every day, whether for 7 hours or 10 minutes. The best thing I get out of it is the ability to experiment and get feedback.

Marvel Smartass: I know this is like asking you which child you love more, but of all your independent projects would you take to the next level if you had a chance?

Ryan Cody: I have a fun character called Cara Fantasma that has endless possibilites for me. I can write a story about him in almost any setting imaginable and he fits somehow. He would be fun to develop in animation but I don’t know how well a live-action version would turn out.

Marvel Smartass: Okay, so I’m in love with your Sketchjam work on a menacing Cloak and an actually teenage Dagger. I think you’d rock an ongoing for them. So, give me your pitch on Cloak & Dagger. Let’s get you a book.

Ryan Cody: Ha! I don’t know about that, but they are always characters I have liked, even though I don’t follow them much. I never understood why Dagger looks like a middle aged stripper though. I always thought that Cloak’s costume made perfect sense while Dagger’s made absolutely none. If I were allowed to do a book on them I would redesign Dagger into more of a street level costume and put them back in the streets, taking care of other kids who have nobody else to protect them. The original dynamic of her being wealthy and loved and him being poor and homeless would still work really well now and be the basis of a good story. I’ve never really thought about it too much to be honest.